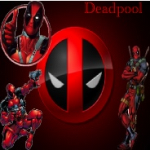 As you can see, I am the founder of this wiki. I enjoy many subjects normally thought of as geeky or nerdy. And constantly my favorite charcters were shown to eventually be killed off. But! When I came across Deadpool, I was overjoyed. I had finally found an amusing, badass character that could never be killed off, because he couldn't die! If there are any problems, message me, and I will get back to you as soon as I can.

I will occasionally speak in the same Shakespearean manner that the Marvel character Thor Odinson does. Don't bug me about it, like, "Why do you talk like Thor if you're Deadpool?". Seriously. Just roll with it.

I also make my own parodies. So far I have finished a parody of Taio Cruz' "Dynamite" based on the Pirates of the Carribbean antagonist Davy Jones, a parody of Perry the Platypus' theme song centered around the Harry Potter character Dobby, and I'm working on on of LMFAO's "I'm Sexy and I Know It" based on my namesake.

Well, ladies. Sorry to disappoint, but I'm not single. No surprise, though. When I was just an iconless noob on the Dragonvale Wiki, I decided to join the chat. Right as I joined, a message popped up that a user by the name of Dragonchickgeek had left. I...well...kinda freaked out. The only thing I payed attention to was that she was perfect for me. All I had to do was ask. It was like there was a shy, introverted character on my right shoulder, and a daredevil on my left. I listened to the daredevil, and asked if she and I wanted to be together. She declined. But, you may ask: "How did she manage to overcome your charm and witty jokes?". Well, it wasn't easy, but I eventually brought it up again, and we've happily been in a slightly-long-distance relationship for the past month. (BTW, I scrambled like AT&T to get her to agree to my proposition. Not as smooth as it sounded.)

Retrieved from "https://deadpoolroleplay.fandom.com/wiki/User:Deadpool314?oldid=4047"
Community content is available under CC-BY-SA unless otherwise noted.